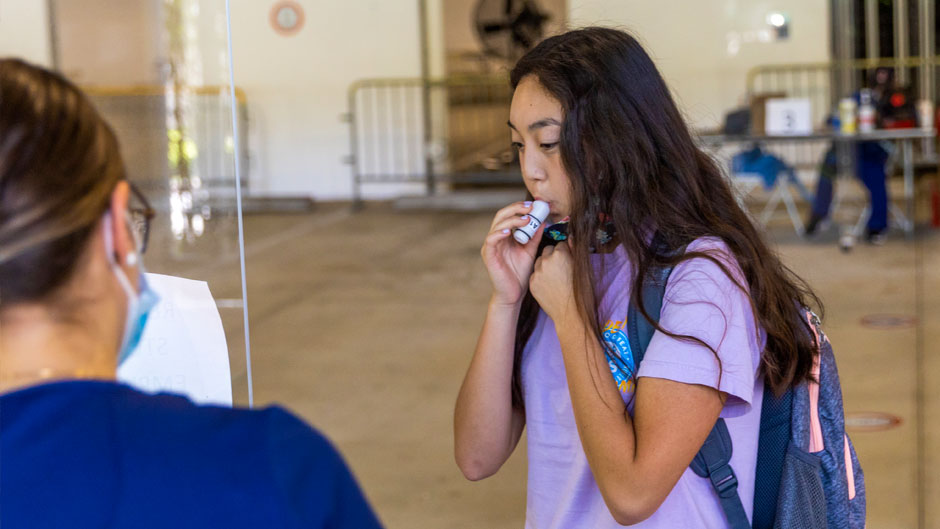 An Australian company is starting clinical trials this month for a COVID-19 breath test, but one expert says don’t cancel your order for rapid antigen tests just yet.

A company based at Twin Waters, on Queensland’s Sunshine Coast, has developed a device that can deliver results in under a minute with what it says is 98 per cent accuracy.

And a Melbourne university professor says his device can detect one or two virus particles in breath in seconds.

But both products are months, at the earliest, from being available to Australians.

“Inside the mouthpiece, we have a biological sensor, which uses electronic signals to determine if the virus is present,” Mr Hickey explained.

“It’s non-intrusive — you don’t have to put it in the nose or anything else — you just breathe in for two, then a five second blow into the mouthpiece. And that’s it.”

The Sunshine Coast team has already run human trials in Malaysia and the device will undergo clinical trials in Singapore this month, with the aim of making the tests commercially available mid-year.

This week, the Queensland company received a $647,665 federal government grant, which Mr Hickey said would help pay for regulatory applications and approvals.

“We’re really looking forward to giving this company the support it needs to get a full commercialisation and make our lives better.” Mr Taylor said.

But a Melbourne respiratory expert also working on a breath test said the federal government could hasten the tests’ availability by buying them.

Professor Bruce Thompson, Dean of the School of Health Sciences at Swinburne University of Technology, has been working with the University of Tasmania and a private company in Port Melbourne, GreyScan, on a test that can detect just one or two virus particles in less than a minute.

He said people could already be using breath tests if the government supported projects like his, not with research grants but purchase orders.

He said governments around the world had been quick to develop vaccines because they were ordered and paid for before manufacturing started.

“We only can work as fast and develop as fast as we can get funding for,” Professor Thompson said.

“Which is, you know, quite, quite annoying, really.

“We have the technology, we’ve developed that. We have a whole suite of proof of concepts and preclinical work. That’s all been done. And we definitely have a pathway forward. It’s just basically needing to have funding to be able to support the project.”

Kim Matthews, a Sunshine Coast mother who has children with sensory issues, autism and ADHD, said a breath test would be a game changer for her family.

“It sounds fantastic,” she said.

Ms Matthews had restricted some outings with her children due to the fear and stress of trying to use a rapid antigen test on them, or worse, lining up for a PCR test.

“There’s a lot of anxiety around getting the test done, just because of the invasive nature of the test, but also, the long waits that we’ve seen and the things that come along with that,” Ms Matthews said

“Standing in a queue waiting your turn — you know, smells, noises, things that these kids are not used to get. It’s not great for them.”

Ms Matthews said a less invasive test would also help a wide range of her clients that she worked with as Director of Sunshine Family Support, which provides support workers for families of children with autism and ADHD.

“It’d be incredibly useful, not just for kids, but for adults as well,” she said.

“We have clients and people in the community who have a lot of anxiety around even just having a mask on their face, so this would be something that they could do easily.”

Professor Thompson said there were risks getting potentially infectious people to blow into a device and it was important tests were done safely.

He said devices had to have a secure closed-capture design and breath tests carefully controlled to ensure the safety of “people in the vicinity”.

“With exhaled breath, the last thing you want to do is infect anybody else,” he said.

“You need to make sure that everybody else is safe around you when you’re doing one of these tests.”