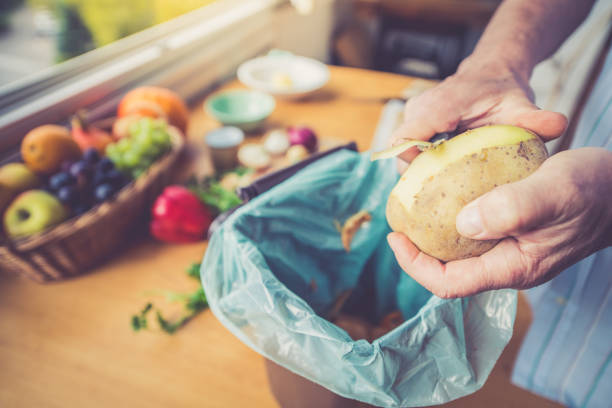 A major Victorian food processor has slashed its reliance on coal and gas by more than 40 per cent by turning potato waste into power and investing in solar.

McCain Foods’ Ballarat plant has built a cogeneration biodigester on site, which creates an energy-rich gas by placing organic materials into an airtight container to break down.

Engineering project manager for CO2 reduction, Scott White, said it was an Australian-first innovation and was the most efficient way to maximise carbon dioxide reduction.

“This is such an exciting project,” he said.

“We had a waste stream from our food manufacturing process that had a low value add market for, so we looked at how we could get more beneficial use out of that.

“We are taking all of the waste that comes out of our factory and putting it through an anaerobic digester, creating green biogas (methane).”

“Normally that food waste would be land-spread, but now we’re getting best value use out of that by creating the green biogas,” he said.

“All the solid waste gets watered down and pushed into a mill, creating what’s almost like a papier mâché type substance, and that is pumped into a pre-acidification tank.

“That tank is like a cow’s first stomach and it’s pre-digesting the food waste, and then it’s pumped into the anaerobic digester where there are heaps of healthy bugs that eat the solid matter.

“The bugs then produce methane from that, which is captured and cleaned so it’s usable.”

The process of creating biogas also generates heat, Mr White says, and the hot air is used to boil water required in the manufacturing process, reducing the factory’s reliance on natural gas.

“We clean and scrub the biogas for combustion in cogeneration turbines, which spin at 70,000 revolutions per minute (RPM) and produce 22,000 volts of electricity for consumption through the plant,” he said.

“We have a massive site here and it’s a big energy consumer so the best use for us is to use that electricity and heat to complement and match the output from our solar farm.”

McCain Foods’ investment in renewable energy has reduced the plants electricity consumption by over 30 per cent and lowered the use of natural gas by 16 per cent.

Mr White said the environmental sustainability of the project was important, and with energy prices soaring due to the war in Ukraine and cold weather conditions spiking consumer demand, there was obvious financial benefits to creating energy on-site.

“We’ve got to look at what our best bang for buck is for investment to reduce CO2.” he said.

“This does offer significant cost savings as well as major CO2 savings.

“McCain Foods has got really stringent global CO2 reductions and in Ballarat we’re leading the way.”

The Ballarat factory will begin construction on a solar car park early next year, which will expand the manufacturer’s solar capacity.

“When combined with the existing on-site solar farm, it is projected to further reduce emissions by more than 12,100 tonnes and produce electricity equal to the amount used by 4,500 homes,” Mr White said.

“The panels on the car park will be bi-facial, so not only will they generate electricity from the sun as it’s beaming down, but also from the reflected sunlight from the ground.

“Solar is a key investment. Even though Ballarat’s known for its cold weather, we actually have quite high solar radiance, so solar does stack up.

“But the sun doesn’t shine 24/7 and that’s the beauty of our cogeneration system, it’s running night and day.”