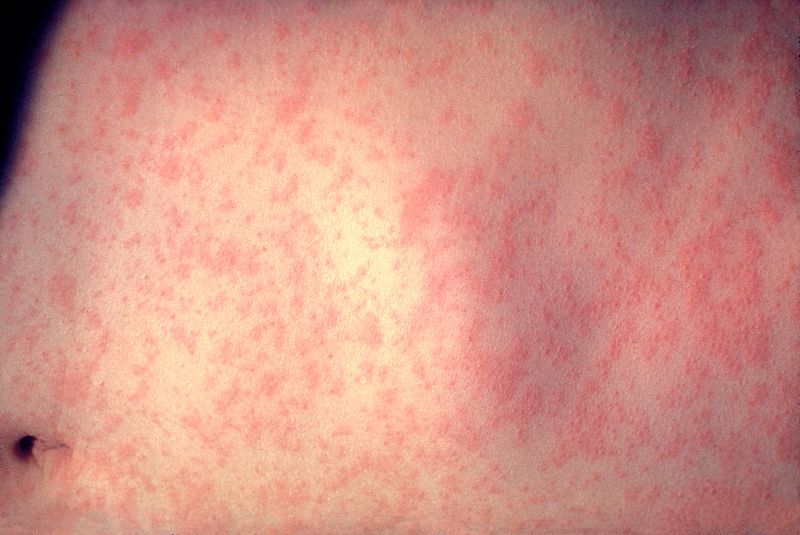 NSW Health officials have issued a stark warning to Sydneysiders after a case of measles was detected in an infant who visited several of the city’s major tourist destinations.

Between Saturday and Sunday, the family headed further south and travelled to the Canberra Centre, Jindabyne and Perisher Ski Resort.

The infant, who was travelling from South-east Asia, was not vaccinated against the disease and developed it shortly after arriving in Sydney.

Vicky Sheppeard, Director of Communicable Diseases for NSW Health, said anyone who visited these locations at those times should watch out for symptoms including a fever, sore eyes and a cough followed three or four days later by a red, blotchy rash spreading from the head and neck to the rest of the body.

“The time from exposure to the disease to the onset of symptoms is typically about 10 days but can be as long as 18 days so people should be alert to symptoms until September 6,” Dr Sheppeard said.

She said that, while infants under a year who are too young to be vaccinated are most at risk, young adults are as likely as small children to be admitted to hospital with the illness.

“People in the 20 to 40-year age bracket may have missed out on the full vaccination program for measles – as it was changed in 1998 to include a national school based catch-up – and mistakenly believe they are protected against the disease,” Dr Sheppeard said.

“We do find that a lot of young adults, even though their parents believe that they have been fully vaccinated, have by mistake missed out on one or two doses.”

Dr Sheppeard said that those who begin to show symptoms should seek immediate medical attention. Adults are also urged to keep track of their own vaccination records and look out for any gaps.

“In the long term, you should be checking your vaccination record and taking advantage of free vaccines [available from age one to 52 from your GP],” she said.

“We also encourage, prior to travelling, to check your documents and get a dose of the vaccine.

“If you are unsure whether you have had two doses, it is quite safe to have another dose.”

Measles is a highly contagious disease that is spread through the air by an infected person coughing or sneezing.

New NSW government laws that came into effect on January 1 prevent parents who object to vaccinating their children from enrolling in preschool and early childhood centres.

Measles may be deadly in rare cases, but high immunisation rates in Australia mean that even single cases are becoming increasingly unlikely. In most circumstances, the disease is introduced by someone from outside the country who has not been vaccinated.

Is fake meat healthy? And what’s actually in it?

What to expect when coming off the pill, and 5 things to do before you do